Games Played A to C 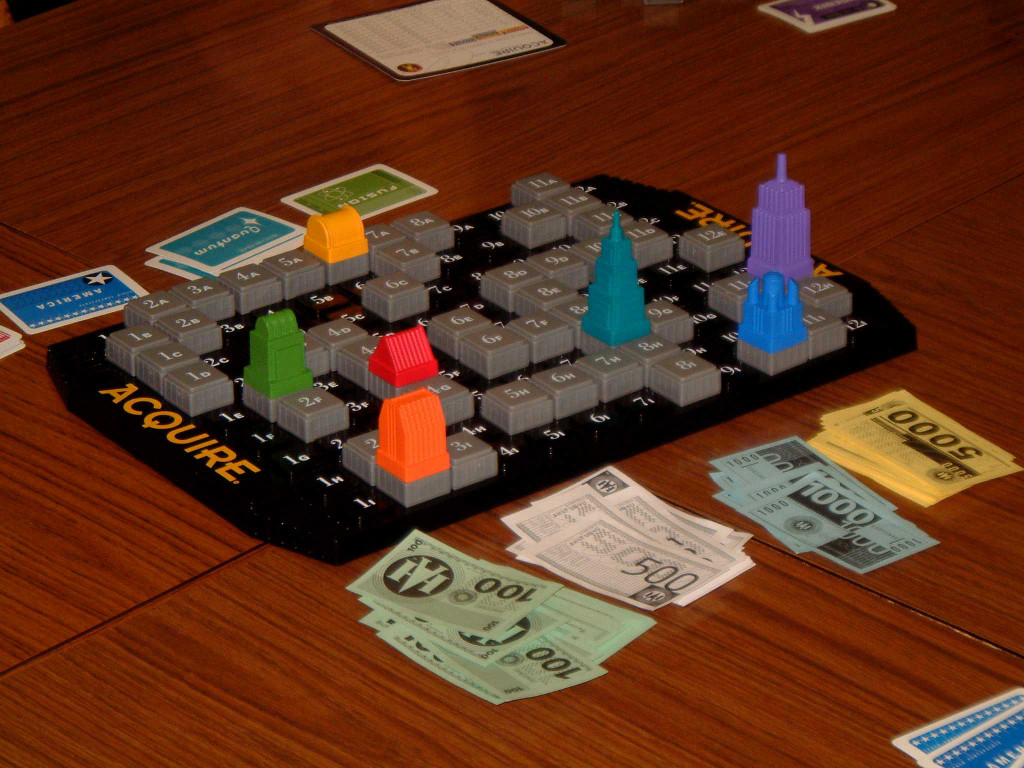 Acquire first appeared in 1962 and is the oldest game that gets still gets regular play at the club. In the game the players are investors in chains of Hotels (or generic corporations in the 1999 edition) and on a turn they must first place a tile on the board. If that tile creates a grouping of 2 or more tiles, a chain is formed and further tiles connecting to that grouping increase the size of that chain. If a tile joins two or more chains, then a merger takes place with the larger of the chains taking over the smaller. After playing a tile and resolving any merger, the player may buy up to three shares in available chains and then draw a replacement tile.

Players in this game must be wary of using all their money money is only received when a merger occurs. When this happens then the holdings of the players in the chain taken over is checked and the largest shareholder receives a payout depending on the size of the chain, the second largest shareholder receives half that amount. After that the players must dispose of their shares, either selling at the price they had before the takeover, converting to shares in the chain taking over or retaining them in the hope that the chain is reformed.

The game can be ended on a player's turn when all chains are safe (size 11 or more) or a single chain has reached a size of 41 or more. When this happens shareholders receive payouts for each chain they hold shares in as if it had been taken over and all shares are sold at current prices. Whoever has the most money at that point is the winner.

"'Age of Industry' is a development of the highly rated Warfrog game 'Brass'. This is a pure business game, when you must seek the most efficient way to make a profit.

By investing in a variety of industries you will make money to invest in more advanced ones. You must judge the market conditions well to determine which industries will give you the best return. Cotton and factories will certainly earn you money, but if you ignore coal mining and producing iron then you may be allowing another player to earn profits from your activities. You also have to consider whether to build ports to increase your profits from selling, and whether to invest in ships to open up new markets." - Back of box.

"Central Europe, around 1670 AD. The Plague which has raged since 1348 has finally been overcome. The civilized world is revitalized. People are upgrading and renovating their huts. Fields must be plowed, tilled and harvested. The famine of the previous years has encouraged people to eat more meat (a habit that we continue to this day)." - Zman Games English Rules 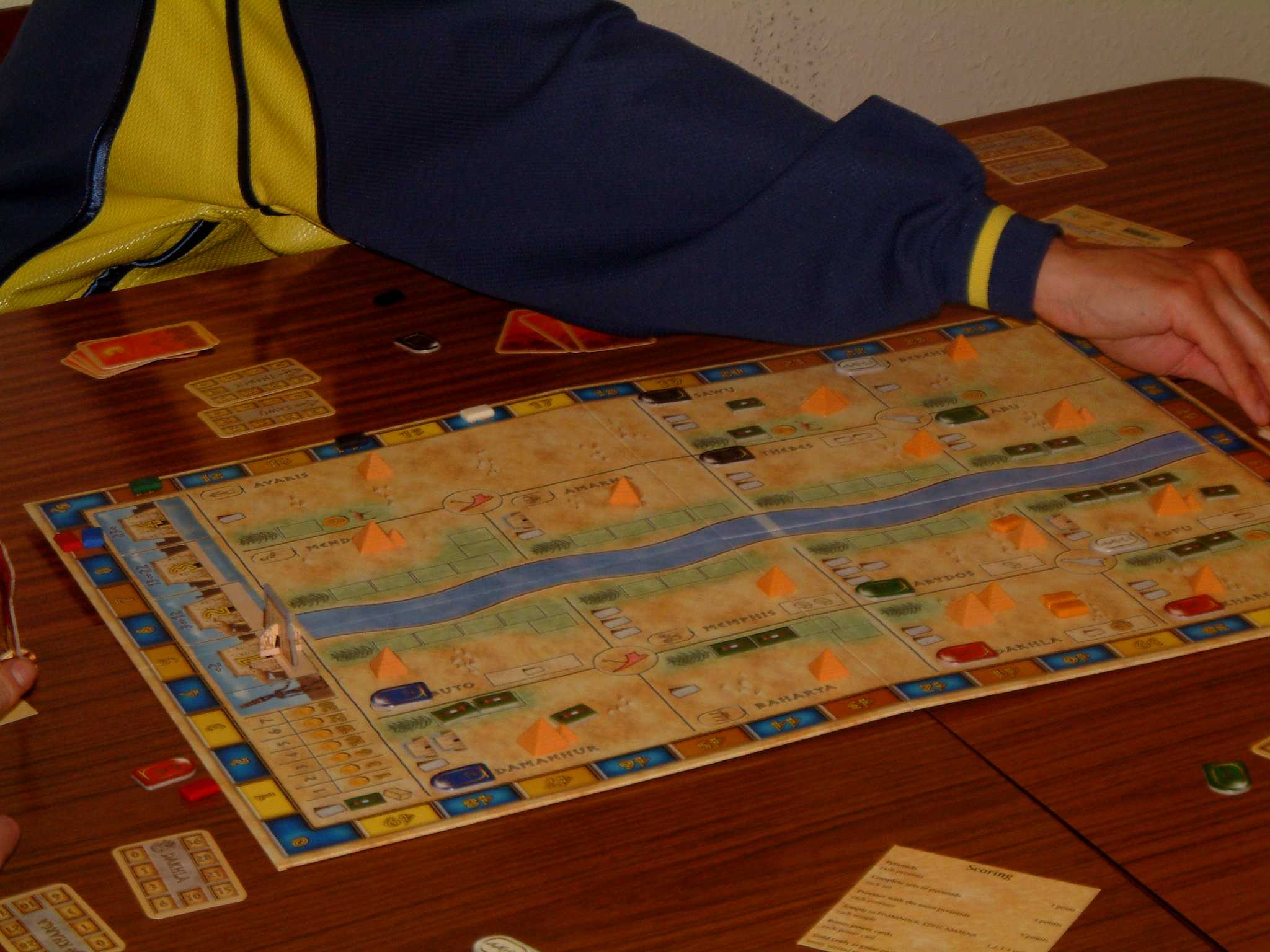 Another game well played at the club since 2003. This is a Victory Point game played in two phase corresponding to the old and new kingdoms of ancient Egypt. In each there are three rounds in each in which players buy provinces and build pyramids in them hoping to score points for possession of pyramids and also buy fulfilling the requirements of power cards that are gained during the game. In each round there is also a sacrifice (auction) with players bidding to gain the most favour with the God, the total bid by all players determining the amount gained from the harvest and also the value of temples in some provinces, if it is a scoring round.

âANTIKE is a challenging strategy game about the evolution and competition of ancient civilizations. The name of the game in German means "age of antiquity".

ANTIKE is not a game of conquest. The ancient nations do not compete to establish the biggest kingdom. Instead, each nation tries to win kings, scholars, generals, citizens and navigators over to its side. The nation that succeeds in gaining a given number of ancient personages first wins the game. Lead an ancient nation to victory! But watch out for your enemies, who will try to destroy your temples!" - English rules

âThe Cylons were created to make life easier on the Twelve Colonies. And then the day came when the Cylons decided to kill their masters. After a long and bloody struggle, an armistice was declared and the Cylons left for another world to call their own.

Forty years later, they returned, and brought humanity to the brink of extinction. The remaining humans, led by the crew of the Battlestar Galactica, fled in hope of finding a new home, one known by legend as Earth.

Humanityâs only hope lies in finding Earthâs location while fighting off the unrelenting Cylons. But as resources run low, it is discovered that the enemy can now appear human and has infiltrated the fleet from the inside.â- Fantasy Flight Games English rules.

This is based on the âreimaginedâ TV series Battlestar Galactica. The players take the roles of characters from the series and are set the task of cooperating to ensure that the remnants of the human population can make their way to the planet Kobol, where they may find clues to the lost planet Earth. In this they are opposed by the Cylons in the form of the game system and also in that 1 or 2 of the characters are secretly Cylons, who will seek to defeat the human cause by reducing a resource to zero or by destroying the Galactica either by space attack or by succeeding in getting a boarding party to the Armoury.

This is a team game, although it will not be apparent who is on which team at the start of the game and players win or lose as a part of their team rather than individually.

A Brief History of the World

"A Brief History of the World is played over six epochs. During an epoch each player will lead an empire. This empire will establish itself, expand into other lands and make an impact on world civilisation. A player collects gold for controlling capitals, cities and monuments and lands. The winner is the player with the most gold at the end of the final epoch." - English rules 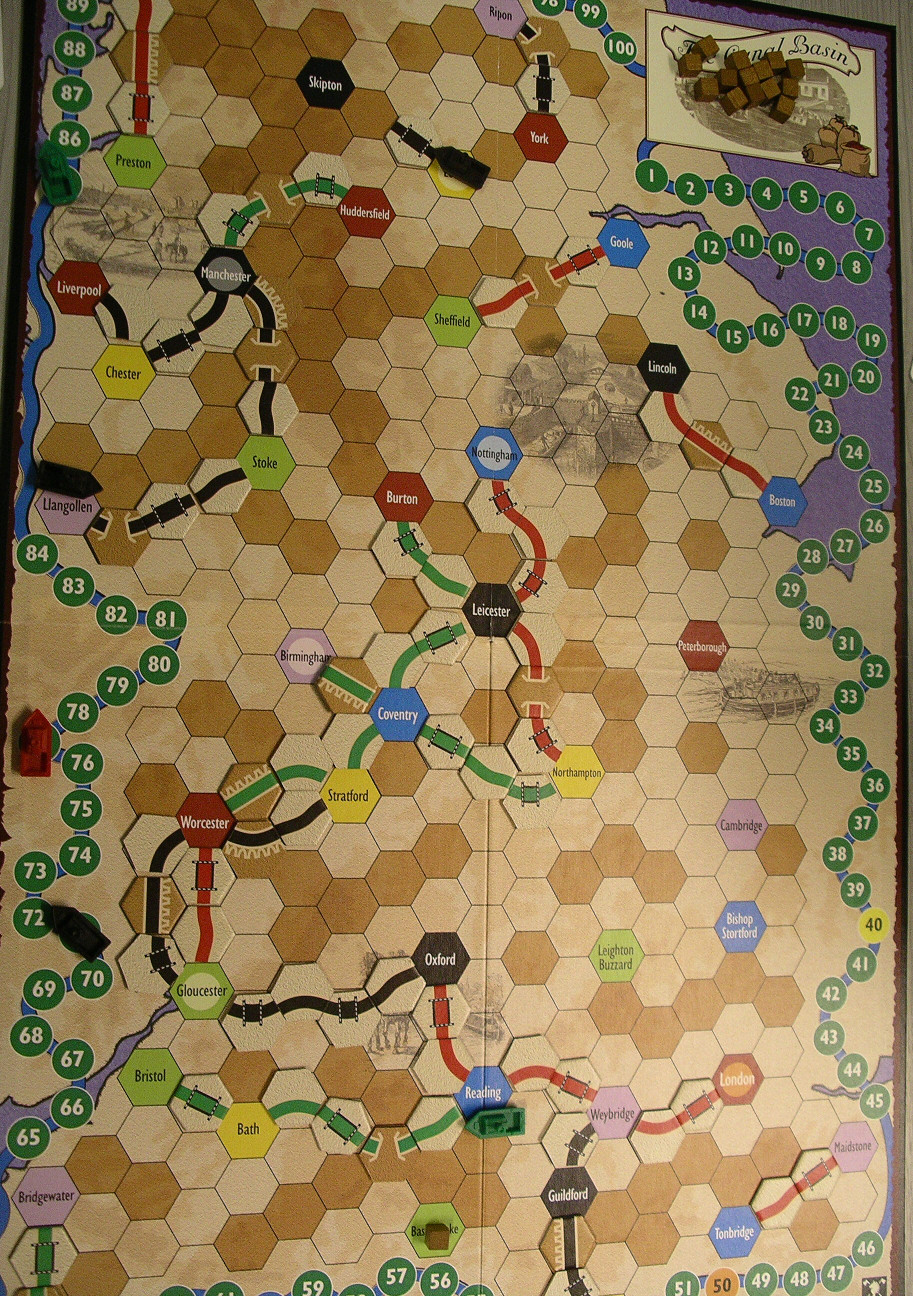 "Canal Mania recreates the growth of the English canal system during the late 18th and early 19th centuries. Players collect points for building locks, aqueducts and tunnels, for completing canal-building contracts and for moving goods during the course of the game. The winner is the player with the greatest points total at the end of the game."- Ragnar Brothers English rules.

During each turn players acquire contracts specifiying which towns or cities they must build canals from to, possibly with a requirement to build via a third town or city. Canals are built by playing cards to allow the placement of hex tiles on the game map showing lengths of different kinds of canal construction and points are scored for different kinds of construction and for the completion of contracts.

During the game, goods will appear on the map and once lengths of canals are complete, players may use them to move one good a turn to a linked city, gaining points for the number of towns on the route linked by lengths owned by the player. Other players may also score points at this stage, if the movemnt also passes along canals built by them.

"The southern French city of Carcassonne is famous for its unique Roman and Medieval fortifications. The players develop the area around Carcassonne and deploy their followers on the roads, in the cities, in the cloisters, and in the fields. The skills of the players to develop the area and use their thieves, knights, farmers, and monks will determine who is victorious." - English Rules

"1289. To strengthen the borders of the Kingdom of France, King Philip the Fair decided to have a new castle built. For the time being, Caylus is but a humble village, but soon, workers and craftsmen will be flocking by the cartload, attracted by the great prospects. Around the building site, a city is slowly rising upâ¦" - English Rules

"1289. King Philip the Fair wants to have a new castle built in Caylus. Workers and craftsmen are flocking by the cartload, attracted by the great prospects of such a formidable task. All along the road that snakes from the foot of the castle, a city is slowly rising upâ¦

The players embody master builders. By building the Kingâs castle and developing the city at its foot, they earn prestige points. When the castle is finished, the player who has earned the most prestige points wins the game." - English Rules

This is the card game version of the board game Caylus following the same pattern as the original game except that the "board" is built up using cards as the game goes on.

"In Citadels, each player leads a city and seeks to increase its prosperity by building new city districts. The game ends after one player has built his eighth district, after which a winner is determined by how many points his completed city is worth. Building the most impressive city, however, is not an easy task. Only by influencing nobles, merchants, and other powerful characters of the realm will you achieve success." - English Rules 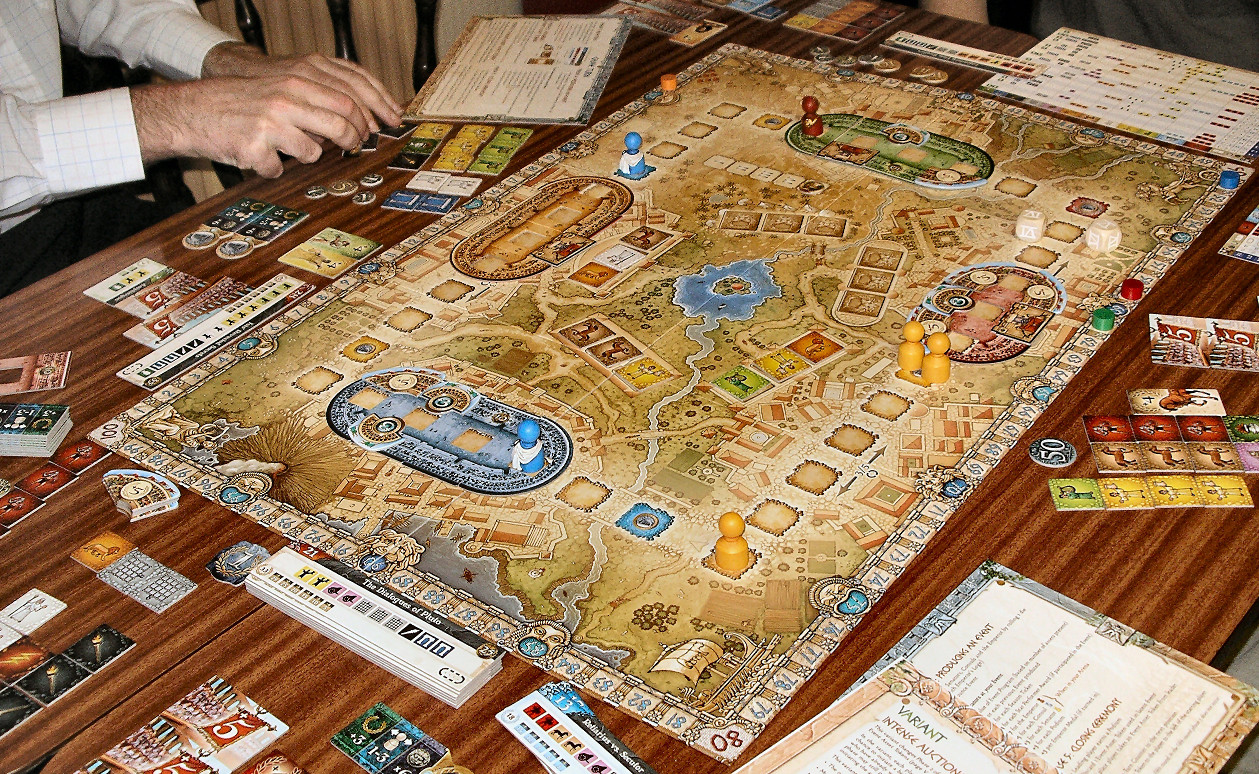 "As commanded by the Emperor, the greatest celebration in Roman history has continued unabated for 99 days. All of Rome has borne witness to the grandest spectacles the empire has ever seen - all to commemorate the opening of the Amphitheatrum Flavium - the Colosseum. Tens of thousands have flocked to the city to experience the sight of a hundred gladiators in battle... rare and exotic animals prowling the arena floor... and to hear and see the greatest musicians and entertainers from throughout the empire. But these events have only been a prelude to today - the closing finale! As a master impresario you have prepared for this moment your entire life. Titus himself has taken his seat in the Emperorâs Loge. At the drop of his hand, the final spectacle will begin. Your moment in the sun has come..." - English Rules 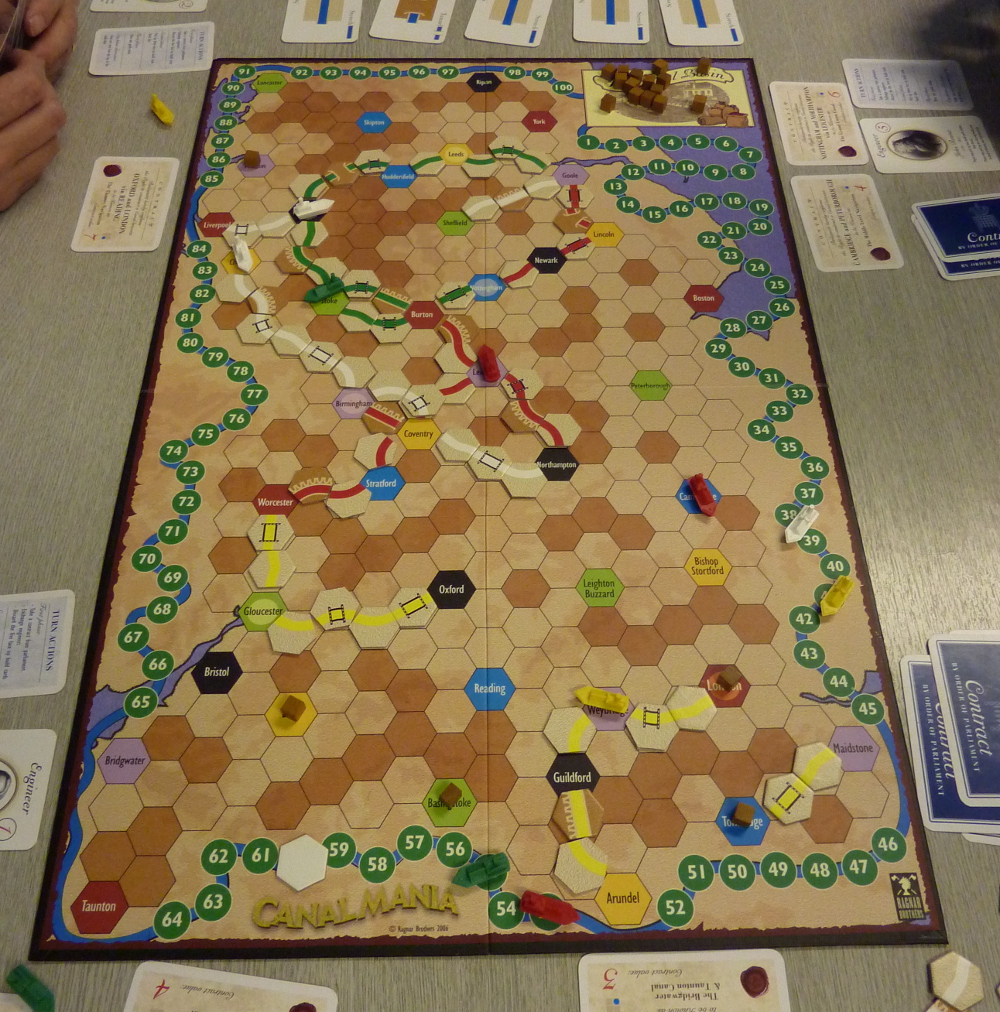