"Control of India at the beginning 18th century is up for grabs. The 200 year-long rule of the Grand Moguls is collapsing, but they still have some power. Now is the time for the Maharishis and princes to take control of the Indian subcontinent. The players use strategy and cunning to win influence over northwestern India, province by province and city by city. The most successful player (and the winner) is the one who establishes the most magnificent palaces and has the most power in the end." - English rules

"Welcome to the world of Tempus. lt is the dawn of time for mankind. Tribes lie scattered across the land, living in huts and hunting for survival. However, the spark of civilization has been lit and the peoples of Tempus will take their first steps towards what will become the modern world.

Tempus recreates the history of a world, from the invention of writing to the conquering of the skies. The game is divided into eras, and at the end of each one a significant development will be made, such as farming or printing. Which civilization will make the leap to the next level all depends upon who has shown the most progress during the turn. Each era brings an improvement, such as having better health, or being able to move further. No civilization is left behind for too long, though, as good ideas always spread quickly." - English rules

"Each player builds a postal system. To do so, each player tries to build an effective network of post offices in the cities on the board, acquire valuable carriages, and collect bonus tiles. It also helps to get help from the postal officials. When a player acquires a value 7 carriage or has placed all his houses, the game is in its final round. When the round ends, the game ends immediately. The player with the most victory points wins the game!" -Rio Grande Games English rules

Each turn players draw a card and play a card to add to a route, the card played must link to one of the ends of the route, otherwise the existing route must be discarded and a new one started. Following card play, the route may be scored or left to be extended the following turn. Scoring a route allows the player to place post offices on the board and score points for the length of route and one the basis of the location of theor post offices on the board, also to gain succesive carriages. The winner is the one with most points at the end of teh game after decutions for unplaced post offices.

"A series of devastating tornadoes, unleashed by enemy mages in the recent war has left all the kingâs castles in ruin. Only the foundations of these once magnificent monuments remain. The war not only robbed the king of his castles, but also of his youth. The now elderly king must choose a successor from among his sons. He has charged them with rebuilding his castles and promised the throne to the one who can rebuild the tallest and largest castles.

Tired of war, the king requires that the building be done in peace and a spirit of cooperation. Thus, the princes may not attack each other or the castles being built. Each prince has 6 knights to supervise the building. Two or more princes may work together on a castle with their knights competing to control the highest towers of the castle. The king will spend each year in a castle and will reward the prince whose knights are guarding him.

Once each year, the king will tour the castles, to judge the progress of each son. After he finishes the third tour, he will choose his successor and prepare for his own death." - English rules 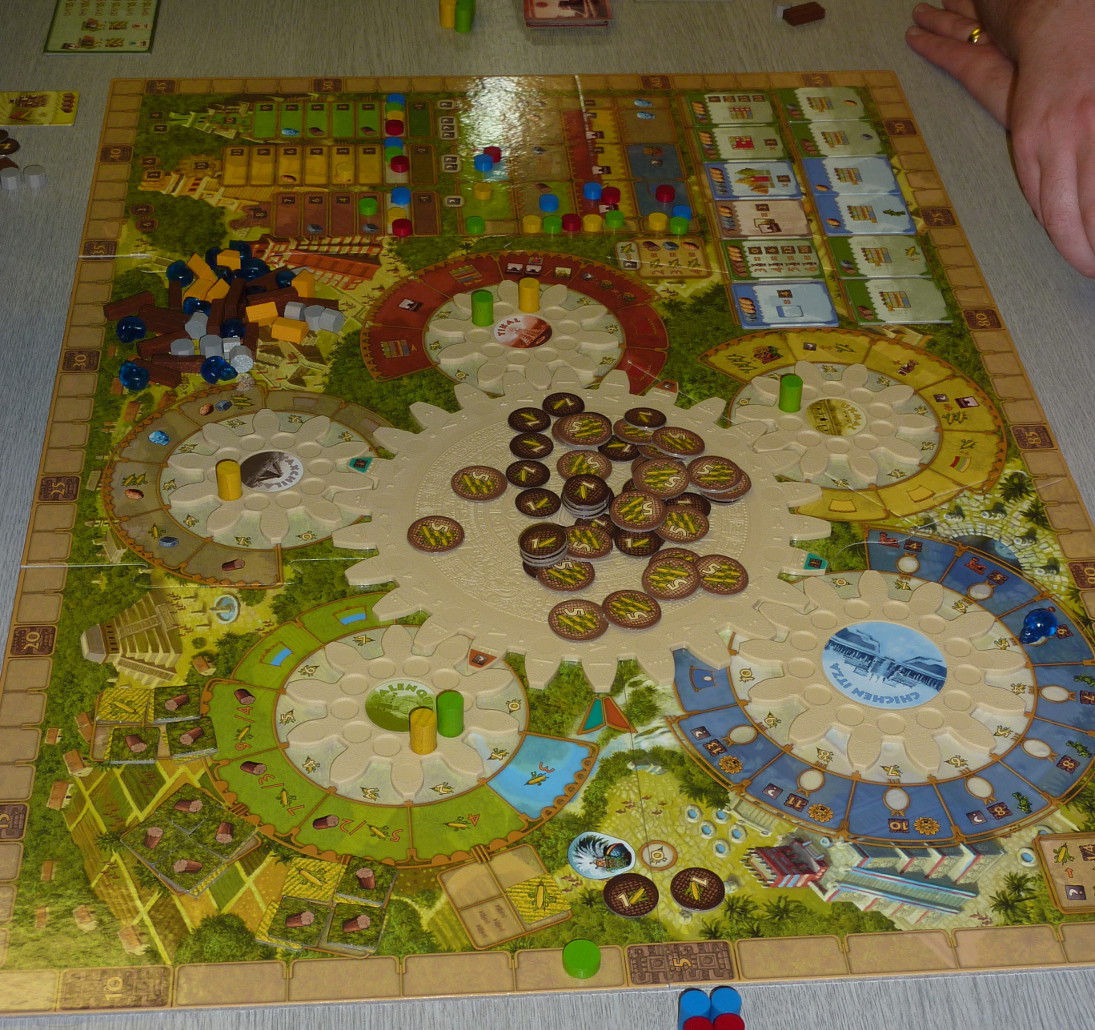 "The Maya was a highly developed civilization known for its unique art, complex architecture, sophisticated mathematics and advanced knowldege of the visible universe. At the heart of their society was the mysterious Tzolk'in - a 260 day calendar that used the movement of the planets to predict the right time to plant seeds, perform ceremonies, and build monuments.

Will you become one of the Ajaw, the leaders of Mayan tribes, worshipping the gods and leading your civilization to prosperity?

The center of the game is Tzolk'in calendar - a set of gears that rotate through the rounds of the game. Your planning will nedd to account for a continually changing game board. Harvest crops extract resources, build moneuments and beware the wrath if the gods." - Back of box. 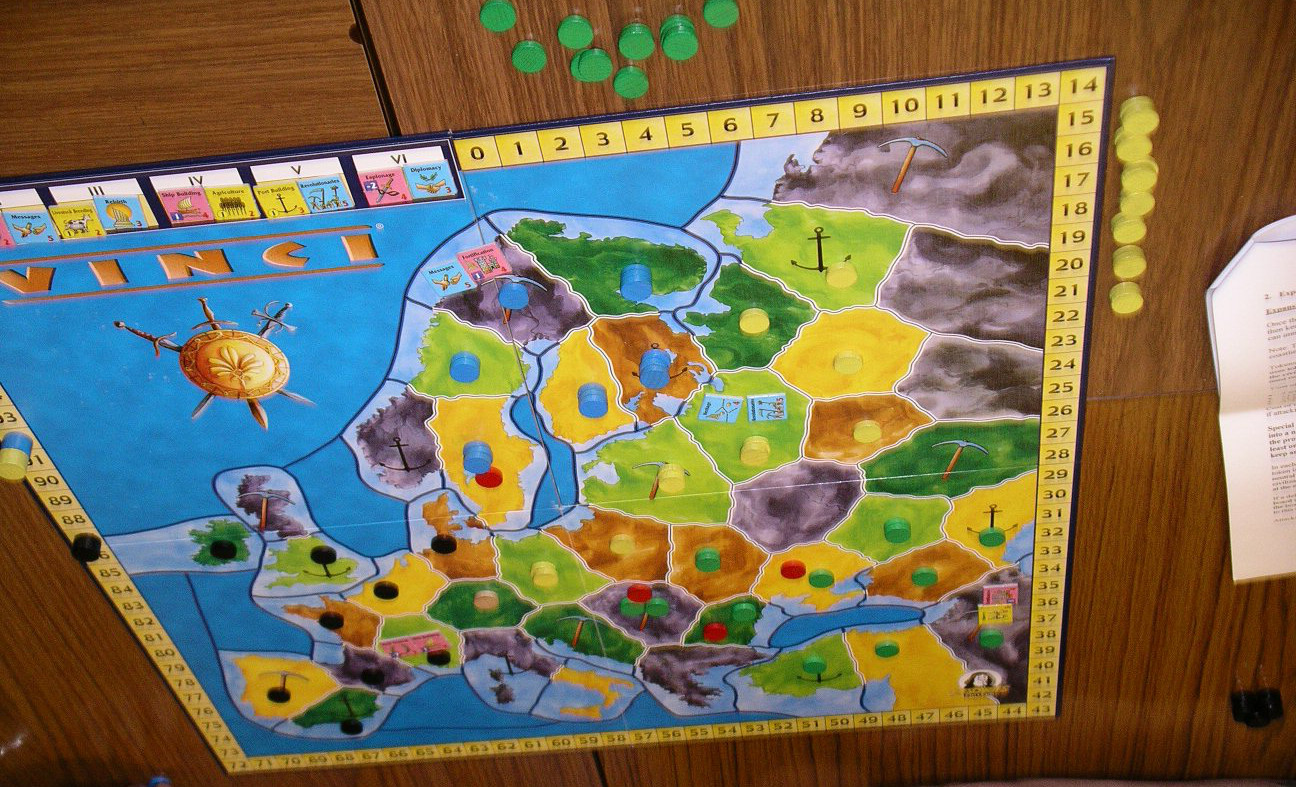 "A game of Vinci spans the growth and decline of civilizations in Europe from Prehistoric times to the High Middle Ages.

During this long period of history, new tribes and civilizations made their mark upon the continent in many ways. Wandering into Europe from across the Mediterranean, the Atlantic Ocean, and the Ural River; or rising from the ashes of previous civilizations. The civilizations spread, made war upon each other, assimilated each other, and eventually vanished to make room for new and growing empires.

The players in Vinci control the destinies of several civilizations, each with different characteristics. Each civilization quickly grows into a vast empire, but the expansion is not infinite. Inevitably, there comes a time when a civilization can no longer grow, and falls into decline. Once this happens, the player ignores the failing empire, and chooses a new civilization to start anew." - English rules